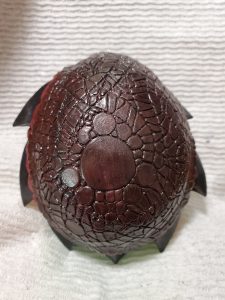 The first painted commission has been completed, sent, and received. It was amazing to see it unboxed live on stream! The reaction of Suchikuchi (now SoulBoundLeather) and her amazing chat community was truly heartwarming. Their response to it, the fact it was my first painted production, and the overall size of the egg makes it something that stands out in my mind. So… that means some more custom lore.

Gargantuan Dragonet / Twinned Dragonets- Through some sort of strange mutation instead of multiple egg clutches only one egg is produced. But it is notably larger than the normal dragonet egg. These eggs can have one of two results upon hatching. The first is a larger dragonet. These will ultimately achieve a size of roughly double the average size. The second, and most rare, result would be two dragonet whelps emerging from the shell. These twinned creatures take extra time to mature and they often perish early on due to being slightly smaller than normal. Their final size isn’t appreciably different from normal dragonets.