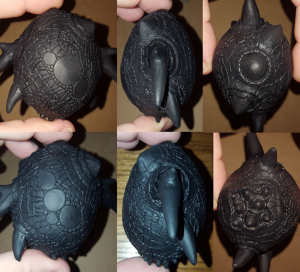 Some of the dream dragonets found solace in a druidic grove. The grove, permeated with natural magics and protected from being spoiled by the greater world by various guardians became a perfect place for the dragonets to roost and clutch. The density of magic had some unforeseen effects however. First and most apparent instead of the ridged protrusions the eggs developed soft antler like protrusions that hardened and calcified during the maturation of the eggs. Once hatched instead of the normal horns one might expect they indeed have tiny antlers which grow and fork with age. Color patterns developed to meld with the natural settings. Mossy patterns, blotches resembling mushroom patches, bright bursts of flowers, and even colors that would blend with trees and leaves both living and fallen on the forest floor.